RSS
← Imagination is good, but this is too far
In lieu of filling your Christmas Jar with Pepsi →

If copper skin is realistic…

There is a suburb just north of the city in which I live, that has an Arts and Design District.  Now, the suburb is pretty ritzy to begin with but the Arts and Design District makes the rest of the suburb look like the ghetto.  The streets are built up so that apartments sit on top of business that run along the main streets.  I once looked into one of these apartments, just for fun.  It was quite expensive for such a little place, although it was very nice and had vaulted ceilings.  Anyway, you get the picture.

Throughout the Arts District there are statues.  There’s an old man sitting and reading a paper on a bench, a woman carrying a grocery bag outside of the butcher shop, and a man playing a violin by the music store, just to name a few.  Some have flesh-colored skin but others have copper skin.  It’s far from life-like.  Recently on the radio there have been commercials for the Arts District in which the woman exclaims how she loves the statues because “they are so life-like!”  What, is she blind?

One that always creeps me out, though, is a little kid watering flowers (or dirt, depending on the season).  First of all, I can’t tell if it’s a girl or a boy.  Second, it is one of the statues that has the copper skin and that just creeps the shit out of me.

So, one time when Jess was visiting, we went to the Arts District for lunch.  After, we came upon the little kid statue.  Jess jumped when she saw it.  It gave her the creeps, too.  “I just want to kick that kid every time I see it!” I told her.  Jess whipped out her camera.  “Go for it!”

Thus a tradition was born.  Jess and I went around to all the statues and posed with them. 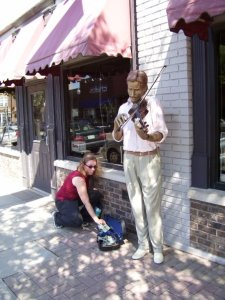 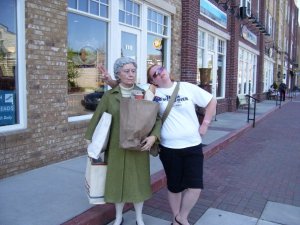 This was actually just one picture of a series we took where I go through all the emotions of seeing this guy (my supposed boyfriend) kiss this chick.  It ends in me kicking the girl.

As soon as Jess and I saw this statue, there was no need to discuss what had to be done.  Why else would a cop put his hand out like that?  Okay, so the plate says its name is “Hello there” so maybe he’s waving to a kid.  But, come on!  Doesn’t it look like he should be slapping someone’s ass?

Posted by Liz on September 8, 2010 in Entertainment

← Imagination is good, but this is too far
In lieu of filling your Christmas Jar with Pepsi →