***I will spoil this movie/book so anyone who wants to see/read The Lovely Bones, do not read on.  You have been warned.*** 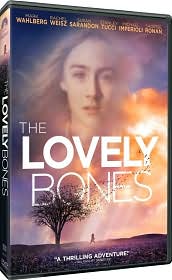 One of the few movies I opted to watch before reading the book was The Lovely Bones.  Mom was with me (taking care of me, actually, as I had pneumonia) and we both wanted to see it.  So we sat down one night and watched it.  For those of you who haven’t and won’t see/read it, the story is told from a dead teenager’s view from the place between Earth and heaven.  After Susie Salmon is murdered but before she can move on, she must first let go of her family.  She finds it difficult, though, as she watches them struggling to come to grips with her death.  Her father and sister try to find the killer while her mother takes solitude away from the family on an orchard.  Grandma (played by Susan Sarandon) comes to try to hold the family together despite her constant drinking.

The plot is good and the acting was great.  So why didn’t I like this movie?  For one, it was trippy.  When Susie is in the in-between, images move and change, sometimes with correlation between them and sometimes not.  At one point, I turned to Mom and asked, “Did I drop acid?” because I didn’t know how else to explain the weird and off-putting imagery.

The other thing that really drew me away from the movie was the end.  Susie watches from the in-between as her killer disposes of her body.  Earlier in the movie, she found that her body was hidden in a safe in his basement.  Scared that Susie’s father was on to him, the killer decides to get rid of the safe in the town sinkhole.  He drives out to the sinkhole and pays some guy to help him roll the safe across to it.  I realize that to build tension, the killer had to take a while to dispose of the body.  However, I kept yelling at the TV that he should have parked closer to the sinkhole and not a fucking mile away (it wasn’t really that far but it felt like it).  What an idiot!

Then there’s Susie.  She is watching all of this happen and decides to make a big move.  She comes down from the in-between and possesses a girl who lives by the sinkhole (and is watching the safe being rolled across the ground).  This girl has been hanging out with Susie’s crush since the murder.  So now that Susie’s in possession of this girl’s body, one would think she would alarm the people that her body is in the safe and that creepy neighbor is really the killer.  But she doesn’t.  Instead, she makes out with her crush as her body sinks to the bottom of the hole, lost forever.  No wonder she was murdered.  She was an idiot as well!

Now, this is to say nothing of the book.  I haven’t read it but I probably will one day.  I’ve heard the book is good so I won’t let the movie disparage me from enjoying it.  But let me save you the trouble with the movie.  Watch something else unless you like feeling like you’re on acid while you watch idiotic people make mistake after mistake.  In that case, this movie is for you.

Posted by Liz on October 21, 2010 in Entertainment