Okay, I don’t really have a million reasons, but I do have very two big ones: Across the Universe and A Million Suns. 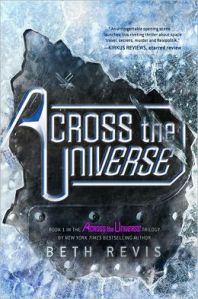 Honestly, I didn’t think I would ever read the first book. The title actually dissuaded me a little because I thought, “Well, here’s someone else trying to capitalize off  the Beatles.” But the day of its release, I read a synopsis of it on my nook and it sounded right up my alley. So I downloaded it and started reading in bed. I was so enthralled with it that I was pissed when my eyes betrayed me and decided to close up shop for 8 hours.

The worst part about any first book in a series is waiting for the next installment to come out. I’ve had friends who’ve purposefully put off reading the Harry Potter series until all 7 books were released, just so that there was no waiting. Sure, I like instant gratification, but I also kind of like all that anticipation, even though it can backfire (see yesterday’s post). 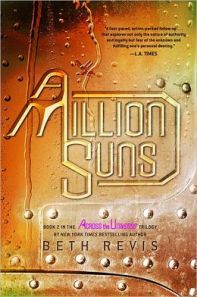 After 51 weeks of waiting, I finally got A Million Suns, the second book in the Across the Universe trilogy. Just like its predecessor, it drew me in and didn’t let go until the very end.

The book picked up a few months later from when the last book left off. Everyone on board the ship has been taken off Phydus. Complacency is no longer a norm. The Recorder Hall is filled with people every day who want to learn more about life on Earth and other topics like history and science. But with this curiosity for knowledge comes rebellion and the questioning of authority. Bartie, once a friend of Elder’s, calls for him to step down, to let a real leader emerge. Bartie doesn’t get much following at first, but once people start getting murdered, more join the ranks. Elder tries to balance between giving people freedom and controlling them so they don’t descend into complete chaos and he still plans on getting to Centari-Earth, no matter what.

Amy, meanwhile, starts exploring Godspeed more closely than before, even though things are far from safe. Luthe (now Luthor) still roams free and Amy fears he will attack her again. But Amy’s stubbornness to learn the truth will not let her stay safely locked up in the hospital. Soon she discovers secret stairwells and containment chambers, as well as clues left behind by Orion. The clue lead her and Elder to Godspeed’s biggest secret. But there’s someone on board the ship who will do anything to make sure it stays a secret. Anything.

There’s not much more that I can say about what happens in the book without spoiling it all. What I can say is this: it far exceeded my expectations. Once again, descriptions of the ship were so well written that I was able to clearly picture in my mind the new sections that were introduced. As more and more secrets of Godspeed were uncovered, the more I wanted to keep reading.

The third and final installment, Shades of Earth, is due out January 2013. It cannot come soon enough.

My utopia is dystopia (part 3)

The third and final book in my dystopian review is Across the Universe by Beth Revis.

The book opens as Amy prepares to be cryogenically frozen, along with her parents and many others.  They are set aboard a spaceship (aptly named Godspeed) bound for a planet that humans will inhabit.  Amy and the others are expected to be thawed 300 years in the future when the ship reaches the planet.

Elder is aboard the ship, years after Amy and her parents have been put aboard.  He is second-in-command, learning from Eldest how to one day run the ship.  However, Eldest has been holding back information because of a rogue Elder from the previous generation.  This doesn’t stop Elder, though, as he sneaks around the ship trying to find out as much information as possible.  For the first time in his young life, he comes across the part of the ship where the frozen bodies are stored.  He comes across Amy, though he doesn’t know her name, and he is instantly fascinated by her bright red hair (after generations aboard the ship, people have become ethnically monotonous).

Amy’s mind continues to be active as she sleeps, bringing up memories of life on Earth.  She is unaware of how much time has passed, yet is conscious that her brain is being active when it shouldn’t be.  At one point she starts hearing voices talking about the thawing process, right before she feels warmth.  Someone is thawing her!  Though complications arise, she makes it out alive, but only to find out that the reason she was thawed was to be killed.

Soon Amy and Elder meet and Amy tries to understand why society on the ship operates as it does.  It’s vastly different from life on Earth.  Not only are the people of one ethnicity (brown eyes, tan skin), they have limited knowledge of history, have sex in the fields during the Season (purely for procreation, though), and lock up the crazy (aka creative) people.  Elder and the people aboard the ship know no different, but to Amy, it is a nightmare.  She is anxious to get to the new planet and see her parents again, but as she and Elder later find out, the ship is still 100 years from its destination.  Amy will long be dead before her parents are woken up.

That’s not all that Amy has to worry about, though.  After all, someone tried to kill her.  She needs to find out who and why.  Elder continues to search out knowledge about the ship and he finds out secret after secret about how the society upon the ship is run and controlled.

The book was well-written, told from Amy and Elder’s points of view in alternating chapters.  Each chapter was titled with the narrator’s name so it wasn’t confusing.  The descriptions of the ship were so detailed that I had little trouble picturing something I’ve never seen.  It wasn’t until I was done reading the e-book version of it that I looked at a hardcover copy at the bookstore.  Apparently the cover’s reverse was a map of Godspeed.*  I was delighted (after my initial reaction of frustration).  Much of what I’d pictured about the ship’s layout was accurate.  To me, that marks the sign of a talented writer.

Overall, the book had a great amount of conflict, both inner and physical.  There was action, yet not so much that it was tiring and there was enough mystery and intrigue to keep me reading without ever feeling like I was working to get through it.

*I do no know yet if the paperback version will include a map of the ship (the paperback comes out in November).  However, if you read the book and need or are curious about the map, visit the book’s official website here.